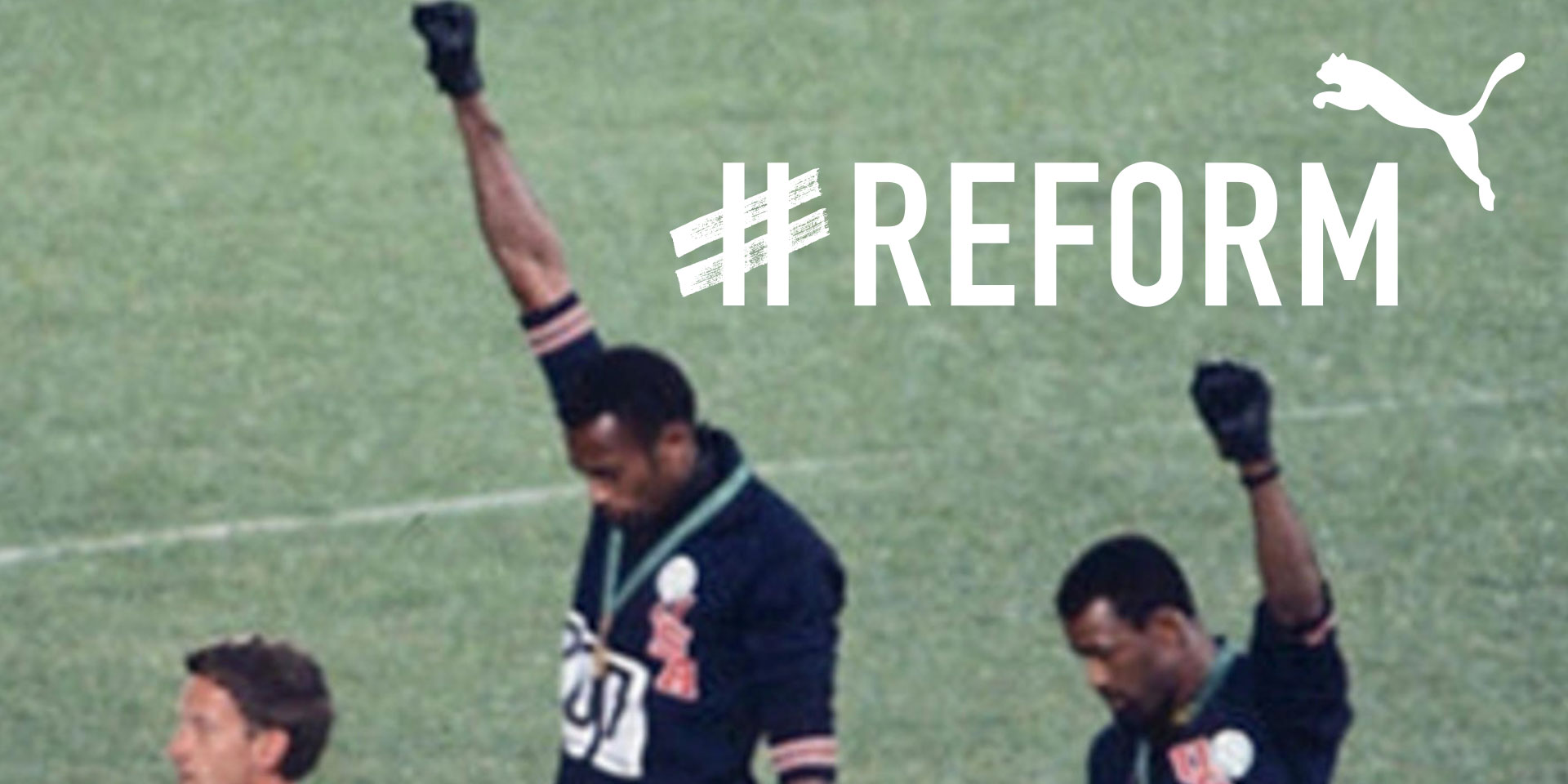 Standing with those who want faster #REFORM

Sports has always been a stage for social movements and PUMA has never shied away from standing with those seeking faster #REFORM.

#REFORM is directly inspired by Olympian Tommie Smith, and his “Silent Gesture” that sparked global debate around the issues of civil rights and universal equality at the 1968 Mexico City Olympics. Our goal is FASTER reform, as we are inspired by the courage of those who risk everything to stand for what they believe in.

We believe #REFORM will happen faster when the right people and partnerships come together to inspire others. PUMA’s goal is to go beyond inspiration and turn intentions into actions.

Therefore, PUMA has created Team#REFORM. This is a collective of individuals who believe that progress toward universal equality needs to be achieved faster. Over the next year, #REFORM will be taking the conversation online and to the streets.

When sprinter Tommie Smith took the gold in the 200 meters in a world-record-setting time at the 1968 Olympic Games in Mexico City, he used his moment on the podium to enter the history books. After he received his medal, Smith bowed his head and raised his fist in a silent gesture which drew attention to human rights abuses and discrimination. This protest cost Smith dearly, as he was suspended from the U.S. Olympics team. He received death threats and also faced repercussions from family and friends. Tommie Smith will serve as our Captain Emeritus of the #REFORM team, fighting for universal equality, and all proceeds from the “Power Through Peace” collection will go towards charity partners fighting for universal equality.

Philadelphia rapper Meek Mill, who has taken the music industry by storm with hits such as “Amen”, “All Eyes on You” and “R.I.C.O.”, has also become a symbol for the need for criminal justice reform in the United States. Following an arrest in 2007, Mill has been in and out of court over minor probation violations and faced the severe strain of these requirements on his work as a budding artist. Other artists and campaigners, such as Jay-Z, have supported Mill in his struggles and the #FreeMeekMill movement was born. Through this movement, Mill has highlighted the problems of the justice and parole systems and how they disproportionately affect people of color. Meek Mill will captain the #REFORM team for criminal justice reform and all proceeds from sales of his #Reform related products will be donated to charities working to reform the criminal justice system.

Dallas Wings points guard Skylar Diggins-Smith is one of the biggest stars in the WNBA. A four-time WNBA All Star, 2014 WNBA Most Improved Player and 2015 ESPY Award Winner. In 2018, she thrust herself into the public debate on equal pay and gender equality by writing an opinion piece in which she outlined the inequality facing female athletes compared to their male counterparts. Skylar Diggins-Smith will captain the #REFORM team for gender equality and all proceeds from sales of her #Reform related products will support charities that advance gender equality.

On October 16th, to commemorate the 50th anniversary of the Silent Gesture at the 1968 Olympics, Team#REFORM Captains will call on PUMA brand ambassadors and all likeminded individuals to join Team#REFORM and celebrate Tommie’s achievements with the #THIRDSALUTE. The #THIRDSALUTE is a social media movement in which individuals challenge others to post an image of themselves with a raised fist, and make a donation to charities pursuing universal equality, including the American Civil Liberties Union (ACLU). All donations from the #THIRDSALUTE will be matched by PUMA, up to $100,000 through December 31, 2018.

On the 16th, PUMA will also launch the “Power Through Peace” Collection, commemorating Tommie’s Silent Gesture, and featuring graphics designed by Lance Wyman, creator of the logo of the ‘68 Olympics. All profits from the sales of this collection will be donated to charities pursuing universal equality.