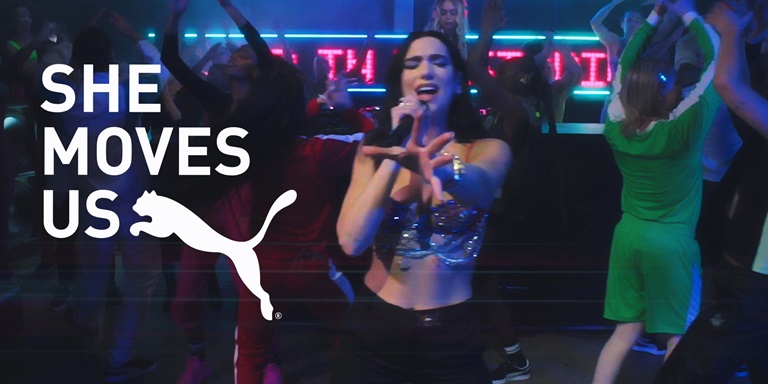 Sports company PUMA has brought together its top female brand ambassadors to celebrate the women who have moved culture and sports forward and to inspire other women around the world.

Led by global pop superstar Dua Lipa, PUMA will generate inspiring content over the course of 2021, such as talks, videos and interviews with its female ambassadors, guided by the theme “She Moves Us”.

"Sharing stories of success is all part of changing the narrative, especially in fields like sports and entertainment that have tended to amplify the accomplishments of men,” said Dua Lipa. “Women are already nailing it across the board and celebrating their achievements is exciting and empowering. It also encourages those rising up to aim for the stars. That’s why I’m so grateful to PUMA for including me in their She Moves Us campaign. Now let’s show the world what we are capable of!”

Supermodel Winnie Harlow and actress, model and activist Cara Delevingne will also participate in the “She Moves Us” campaign. They will be joined by numerous PUMA athletes such as WNBA star Skylar Diggins-Smith, golfer Lexi Thompson, footballer Nikita Parris and high jumper Yaroslava Mahuchikh.

“She Moves Us” will tell the story of how our female ambassadors were inspired to become who they are today, the women who helped them, how they overcame challenges in their personal lives and careers and how they made it to the top in their respective fields.

By connecting its ambassadors with female consumers around the world on its social media platforms, PUMA will also create a global network which will spark a conversation around issues important to girls and women.

“She Moves Us” will empower girls and young women through PUMA’s partnership with Women Win, a global women’s fund which uses sport to advance gender equality from the bottom up. PUMA will use its communications channels to spotlight the joint efforts to impact girls and women’s rights globally.