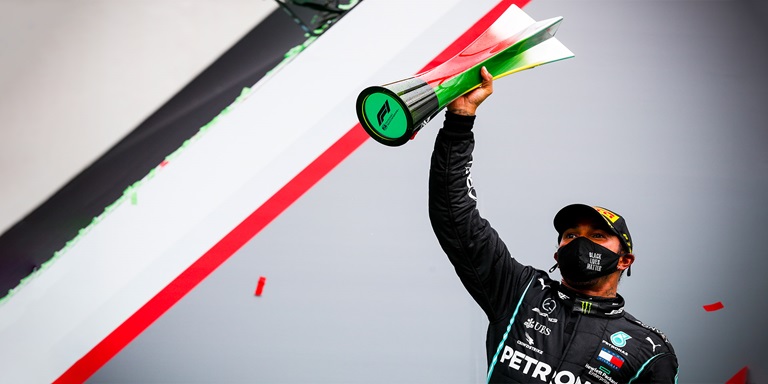 Global sports company PUMA is paying  homage to Lewis Hamilton’s seventh World Champion title highlighting the unique collaboration with one of the greatest Formula One drivers of all times. The Briton has been a part of the PUMA Family since 2013 and became the face of the brand as ambassador for performance in 2017.

The collaboration between PUMA and Lewis Hamilton is best described as “A perfect Fit”. “A good relationship means happy people, communication and respect between each other - that´s key”, said the seven time world champion. By matching Michael Schumacher´s long-standing record of titles Lewis Hamilton is now unquestionably one of the greatest racing drivers of all time and as well on his way to being “Forever Faster”. The young British talent began his relationship with PUMA in 2013 when he moved to the Mercedes-AMG Petronas Formula One Team, who have been supplied by PUMA with all technical clothing and footwear since 2012. This includes providing e.g. the race suits plus race boots and with the objective of securing the drivers’ competitiveness and safety through high-end lightweight fabrics and fireproof materials.

“We definitely have got the highest tech racewear kit,”

“Though such a development process does take its time. PUMA has been very responsive and quick to support us.” The direct interaction between driver and race gear supplier is key to assure the Mercedes-AMG Petronas F1 Team receives the best quality and fit they need on their quest for the podium.

Training is one of the most important aspects for a race driver to focus on in order to remain competitive from the first lap to the last of a Grand Prix. “It’s always a lot of time training and preparing,” Lewis added. “Actually people watching Formula One do not realize how physical
racing actually is as it does look easier on TV. "  In 2017, PUMA decided to work with the British F1 driver as a brand ambassador for performance. Lewis became the face of the brand at multiple events, advertisements campaigns and billboards. “I need to be in the best shape possible. And I need to have the best kit to get me there. PUMA is all about technology, comfort and efficiency. So there are a lot of parallels to support me on this level,” acknowledges the Briton.

Looking deeper into collaboration opportunities inclusion and equality are topics both PUMA and Lewis Hamilton support from the core. This year saw the “Black Lives Matter” (BLM) movements and other organizations standing up for equal rights. The Formula One champ aligned with BLM to show his support for greater diversity and inclusivity. Lewis Hamilton was included in PUMA’s “Is Anyone Listening” campaign this year, talking with Tommie Smith and Thierry Henry about inclusion and equality. “PUMA has already been part of history with Tommie Smith. It is amazing to see how PUMA is utilizing the platform they have to push for change. That’s awesome but also  knowing that there is still more work to do”, said Lewis Hamilton.

one of The Greatest of all time