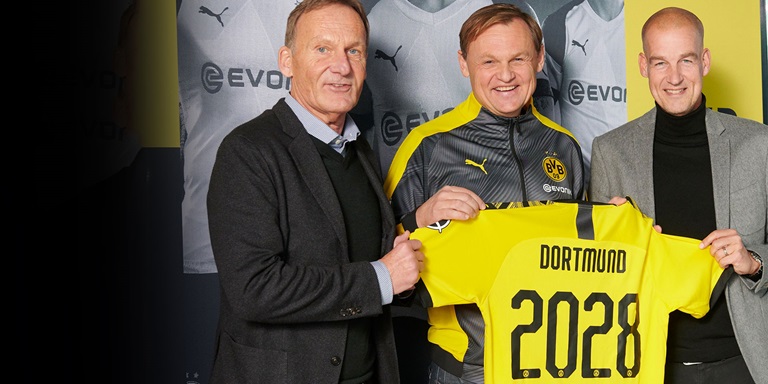 Sports company PUMA and German football club Borussia Dortmund have signed a long-term partnership extension, which will see PUMA continue to develop products to match BVB’s energetic and fast-paced football and cater to the needs of the club’s fans around the world.

PUMA and BVB first joined forces during the 2012/2013 Bundesliga season. Since then, the club has won the German cup, the German Supercup, reached the Champions League Final and has become increasingly relevant as a global football brand. Known for its passionate fans and formidable atmosphere, BVB is one of the world’s best supported teams. It has recorded the highest average home attendance in world football over the past five years.

“Borussia Dortmund is one of our most important partners,” said PUMA CEO Bjørn Gulden. “We love the fans of this club and the atmosphere they create at the Signal Iduna Park. It is quite possibly the best stadium atmosphere in the world.”

BVB chief executive officer Hans-Joachim Watzke said: “For many years, PUMA has been more than a supplier and a sponsor for BVB. It has been a heavyweight in the shareholder structure of our club, too. This shows the enormous identification of PUMA and its staff across the world. Our partnership has grown and extends far beyond the boundaries of a normal business relationship. We would like to add another chapter to our joint success story in the coming years.

Borussia Dortmund’s managing director Carsten Cramer added: “Borussia Dortmund and PUMA share the same philosophy of intensive football and an emotional fan experience. PUMA is one of the most creative and dynamic sports brands on the planet and yet it has retained a family feel. We’re proud that two companies with such a positive energy will continue to bounce off each other going forward.”

Under the terms of the deal, PUMA will continue to supply kits to all BVB teams and create replica and fanwear products. The company also has separate agreements with BVB players such as Marco Reus, Julian Weigl, Axel Witsel, Lukasz Piszczek and Marwin Hitz.