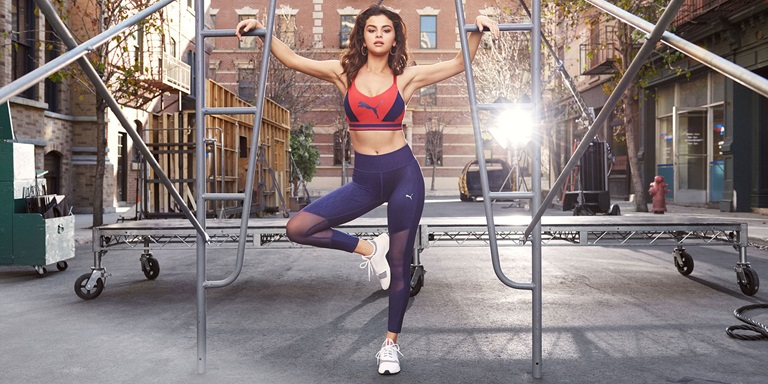 “The second quarter developed positively for us with sales growing organically 15% and EBIT increasing 33%. All regions and all product divisions posted double digit organic growth. The continued strength of the Euro gave us headwind in reported sales, but along with other currency effects, this also impacted our gross margin positively. The first six months of the year showed major shifts in product trends and consumer demand, especially for footwear. But we feel that our “fast attitude” and quick reaction time allowed us to continue our growth. We got very positive feedback to our plans of re-entering the Basketball category and both - the announcements of our new NBA players and the revelation of the product - were well received from retailers and basketball fans. The World Cup in Russia was a good event for us with PUMA players Antoine Griezmann and Romelu Lukaku making it almost to the top of the scorer list in second and third place. The launches of the collections for our new top clubs AC Milan, Olympique de Marseille and Borussia Mönchengladbach were further highlights and have shown our commitment to football. Despite the changes in product trends and the uncertain business environment caused by volatile currency rates and difficult global trade environment, we feel confident that we will reach our full-year EBIT target between €310 million and € 330 million which is a growth of around 30%.”

PUMA's sales growth continued in the second quarter of 2018. Sales rose by 15.0% currency-adjusted to € 1,049.2 million. All regions contributed with double-digit increases. Footwear continued to be the main growth driver and Apparel and Accessories also grew at a double-digit rate. However, currency translation effects due to the strength of the Euro against most other currencies negatively impacted the sales development in reported terms (+8.3%).

The gross profit margin improved to 48.6% in the second quarter (last year: 46.5%). The increase is mainly related to more sales of new products with a higher margin, further sourcing improvements and positive currency effects.

The operating result (EBIT) increased from € 43.4 million last year to € 57.6 million due to a strong sales growth combined with an improved gross profit margin.

Sales for the first half-year 2018 were up by 18.3% currency adjusted to € 2,180.3 million. All regions showed double-digit growth with Footwear being the main growth driver. The strong Euro against most other currencies significantly impacted our reported sales growth, that amounted to 10.5% in the first half of 2018.

Including eCommerce, PUMA's own and operated retail sales increased by 23.7% currency adjusted to € 490.0 million. This represented a share of 22.5% of total sales for the first half of 2018 (21.8% in the previous year). The reasons for the rise are a like-for-like sales growth in our own retail stores, the extension of our retail store network and a continued strong growth of our eCommerce business.

The gross profit margin improved by 160 basis points from 46.8% to 48.4% in the first half of 2018. The increase came mainly from more sales of new products with a higher margin and further sourcing improvements. In addition, positive currency effects materialized in the second quarter.

Operating expenses (OPEX) increased 9.3% and amounted to € 893.7 million. The increase was driven by higher sales related variable costs, intensified marketing activities and investments in the refurbishment and expansion of our own retail store network.

As a result of the increase in earnings before taxes (EBT) and the positive working capital development, the free cash flow improved from € -117.9 million to € -103.3 million in the first half of 2018. Cash and cash equivalents increased, as did our bank liabilities due to the dividend payment (€ 186.8 million) made in the second quarter. As a result, our net cash position declined to € 88.8 million (last year: € 152.4 million).

Our full-year guidance for EBIT remains unchanged and we continue to expect the operating result to come in between € 310 million and € 330 million. This is now the combined effect of a currency-adjusted increase of net sales between 12% and 14% (previous guidance: between 10% and 12%), a gross profit margin improvement of approximately 100 basis points, and a high single-digit rate increase in OPEX related to additional investments in sports marketing and higher sales related variable costs. Management still expects that net earnings will improve significantly in 2018.

Following the distribution of approximately 70% of the PUMA shares by Kering S.A. to its shareholders, PUMA’s free float has increased from approximately 14% to 55%. The distribution took place on May 16th and was accompanied by investor communication, including road shows and a capital markets day, on PUMA’s side. The feedback from the financial community confirms the confidence into PUMA’s strategy and opportunities.

PUMA’s Annual General Meeting resolved on April 12, 2018 to replace the existing monistic management system of the Company with the dualistic management system and to amend the Articles of Association accordingly. The dualistic management system consists of the Management Board (Vorstand) as the management body and the Supervisory Board (Aufsichtsrat) as the supervisory body. The changes to the Articles of Association were entered into the Commercial Register of the Local Court in Fürth on July 9, 2018. Accordingly, the change in the governance structure became effective on that day. The Management Board consists of Bjørn Gulden (CEO), Michael Lämmermann (CFO) and Lars Sørensen (COO). The Supervisory Board consists of Jean-Francois Palus (Chairman), Jean-Marc Duplaix, Béatrice Lazat, Thore Ohlsson elected by the shareholders and Martin Köppel as well as Bernd Illig elected by the employees.

Thanks to our partnered athletes and teams as well as our other brand ambassadors, PUMA successfully strengthened both its sports and lifestyle positioning in the first half of 2018.

A major highlight was the announcement of PUMA’s re-entry into the Basketball category. Jay-Z has taken the role of Creative Director for PUMA Basketball. In this capacity, he will be overseeing the creative strategy, creative marketing, and product design for all basketball-related products. Marvin Bagley, Deandre Ayton, Zhaire Smith, Michael Porter Jr. and Rudy Gay are the first NBA players to wear performance PUMA basketball shoes on court in 20 years. In addition to a clear commitment to performance on the court, PUMA will leverage its credibility in the cultural environment around basketball, which is getting increasing attention of American consumers. Our re-entry into the Basektball category is clearly a commitment to the North American market and a building block to strengthening our business also in other performance categories.

In Football, all eyes were on the FIFA World Cup 2018 in Russia. Our four national teams - Uruguay, Switzerland, Serbia and Senegal – along with a variety of outstanding individual players ensured a high visibility of the PUMA brand during the tournament. Half of our partnered teams reached the second stage, while two out of the top three scorers of the tournament, Antoine Griezmann (2nd) and Romelu Lukaku (3rd), are PUMA players. Griezmann, who led the French team to victory with his goal, was named “FIFA Man of the Match” in the World Cup final. Together with Olivier Giroud and Belgian striker Romelu Lukaku, Griezmann ensured a high visibility of our brand in the final matches of the competition. Our players wore PUMA’s latest technologies, the PUMA FUTURE and PUMA ONE, in customized editions.

In club football, the end of the 2017/18 season was marked by excellent performances of our players on the pitch. All goals of the UEFA Europa League final were scored by PUMA players, as Griezmann and Gabi shot the three goals to Atlético Madrid’s victory. In Mexico, PUMA-partnered team Santos Laguna won the Liga MX Clausura, the closing tournament of the top level Mexican football league.

With Olympique de Marseille, A.C. Milan, Borussia Möchengladbach and São Paulo football club Palmeiras joining the roster of the brand’s prestigious football clubs, PUMA will strengthen its position in international football for the upcoming seasons. The 2018/19 jerseys of the newly signed clubs have just been revealed and received positive fan and media feedback.

In Running and Track & Field, our sponsored athletes impressed with world class performances. The 19-year old Cuban Juan Miguel Echevarria took the first place at the Stockholm Diamond League Meeting with his incredible long jump of 8.83m, which was chosen as the “2018 Season Highlight” by the IAAF. At the XXI Commonwealth Games, PUMA athletes won an impressive total of eleven medals. Olympic and World Championship silver medalist Will Claye won the men’s Triple Jump by setting a new world-leading mark with 17.43m at the World Indoor Championships in Birmingham. Earlier this year, we enlarged our portfolio of federations by signing a long-term partnership with the Norwegian Athletic Federation. Furthermore, PUMA is proud to have two new top athletes joining its roster: French sprinter and European record holder in 100m Jimmy Vicaut and Italian high jumper Gianmarco Tamberi.

In Motorsport, our three partnered F1 Teams MERCEDES AMG PETRONAS, Scuderia FERRARI and RED BULL RACING continue to dominate in Formula One, being currently ranked among the top three positions, both in the drivers’ and the constructors’ championships.

Our strategy has continued to focus on our five priorities: Increasing brand heat, offering a competitive product range, proposing a leading offer for women, improving the quality of distribution and strengthening our organizational infrastructure. We feel that PUMA is on the right track as our strategy, marketing and products are starting to show results. This has been once again confirmed by improved financial results, increased sell-through performance and the continued positive feedback from our retail partners.

Working with the right influencers and letting them communicate on behalf of our brand has become an essential part of our strategy: We have contracted new athletes, cultural icons and influencers, who have helped to further fuel PUMA’s brand heat, such as Selena Gomez, the most followed person on Instagram. Selena has been working alongside PUMA's design team to create exciting products for our female consumers.

Our Women’s category continued our successful “Do You” campaign with its powerful ambassadors, including Cara Delevingne and the dancers of the New York City Ballet. Key styles behind our women’s footwear business were the training shoes PHENOM, MUSE and MUSE ECHO, while the newly launched DEFY showed promising first results.

Four-time Formula One World Champion Lewis Hamilton embodies the Men’s training proposition “24/7”. With this product line, PUMA has redefined its performance philosophy, offering products that perform everywhere from the gym to the street – 24/7. As part of this collection, PUMA just launched the training shoe Mantra FUSEFIT.

Another footwear success was the recently launched THUNDER, which won the hearts of the fashion-forward crowd with its disruptive design, and its bulky, unapologetic look. The first two product drops sold out within hours.

Quality of distribution remains a focus for PUMA. We continue to give high priority to the benefit of our retail partners. We work hard every day to ensure that our contribution to their business is positive and further improving. Feedback from our retail patners continues to be good. Retailers in most channels have started to dedicate more shelf space to PUMA, allowing for our business to be based on a broader selection of styles.

We have also continued to improve our organizational structure and infrastructure. One aspect with high visibility is the completion of our extended headquarters building in Herzogenaurach, that now hosts more than 1,000 employees together under one roof in a state of the art facility. This not only allows for faster communication and better alignment, but also adds to our great team spirit.