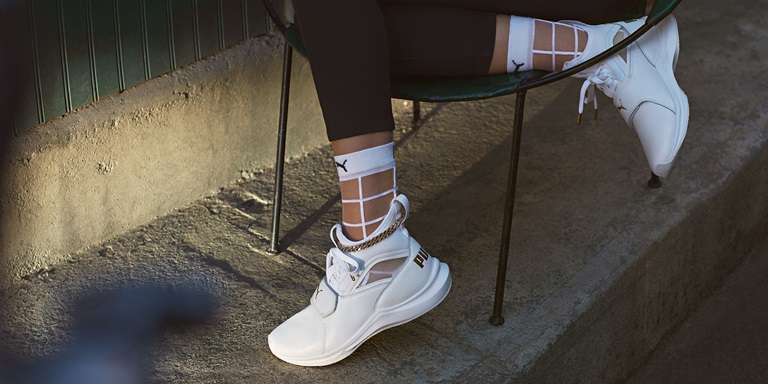 STRONG SALES AND EBIT GROWTH IN THE FIRST QUARTER

“We started the year with both first-quarter sales and profitability (EBIT) coming in stronger than we had expected. The double-digit sales growth in all regions and product segments, including an exceptionally high growth in Asia, led to a very strong 21.5% organic sales increase. Operating result even grew by 60% to € 112 million due to higher sales, an improvement in our gross margin of 110 basis points and a tight OPEX management.

Because of an uncertain business environment caused by volatile currency rates and the difficult economic trade environment, we raised our outlook for the full year only slightly. We now expect our sales to grow 10% to 12% in local currency (previous 10%) and EBIT to come in between € 310 to € 330 million (previous € 305 to € 325 million).”

PUMA's sales growth continued in the first quarter of 2018. Sales increased by 21.5% currency-adjusted to € 1,131.1 million (+12.5% reported) compared to € 1,005.1 million last year. Due to the strength of the Euro against all other major currencies during the first quarter 2018, there is a 9% negative difference between sales growth in Euro and constant-currency terms.

All regions and product segments supported the sales growth with a currency-adjusted double-digit increase. Particularly our Asia/ Pacific region, driven by China, achieved a strong sales growth of 34.8% in the first quarter. Footwear continued to be the main growth driver followed by Apparel and Accessories. Running and Training as well as Sportstyle were the categories with the strongest growth rates.

The gross profit margin improved by 110 basis points from 47.1% to 48.2%. The increase came from a favourable regional sales mix, higher sales of new products with a better margin and further sourcing improvements.

Operating expenses (OPEX) grew by 7.5% to € 437.3 million in the first quarter. The increase was mainly caused by higher marketing and retail investments as well as higher sales-related variable costs.

Strong currency effects and our continued focus on working capital management led to a decrease of working capital of 1.3% to € 791.0 million. Omitting these currency impacts, working capital would have grown by approx. 10%, lower than our growth in business. Inventories rose only slightly by 1.3% to € 760.4 million and trade receivables grew by only 5.8% to € 685.0 million. Trade payables decreased by 8.0% to € 471.4 million.

The first quarter saw a strong increase in sales and profitability, but several uncertainties in our business environment have recently developed. This includes adverse and volatile currency developments, political instabilities as well as the uncertain trade environment between the USA and China. Therefore, we adjusted our guidance for the full year 2018 only slightly. PUMA now expects that currency-adjusted sales will increase between 10% and 12% (previous guidance: currency-adjusted increase by approximately 10%). The operating result (EBIT) is now anticipated to come in between € 310 million and € 330 million (previous guidance: between € 305 million and € 325 million). In line with the previous guidance, the Management still expects that net earnings will improve significantly in 2018.