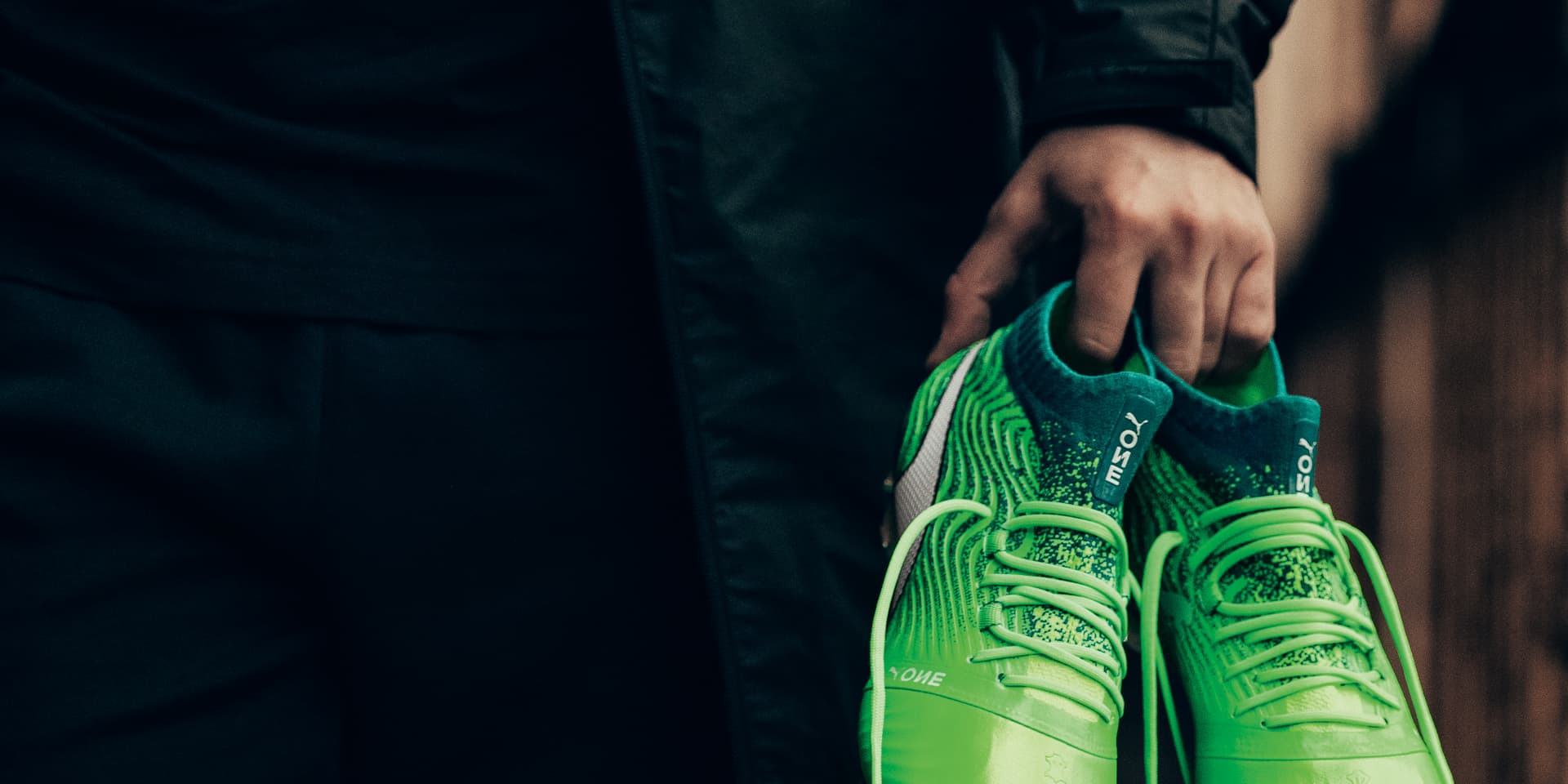 PROFITABILITY AFFECTED BY SLOW-DOWN IN EUROPE

“After a strong finish in 2011, PUMA’s first-quarter sales growth could not keep pace with that of recent quarters, translating into weaker bottom line results, said Franz Koch, CEO of PUMA SE. “Our first quarter sales performance indicates that we are facing challenges in Europe. As a consequence, we have begun to respond to these challenges, optimizing the efficiency of our business model in the EMEA region. In addition, I am confident that the product innovations we have in the pipelines will contribute to achieving our full-year sales and earnings targets against the background of this extraordinary sports year.”

Sales in the EMEA region softened by 1.4% currency adjusted to € 368 million, as restrained consumer spending in the wake of the financial crisis in the Eurozone continued to impact demand. In addition to the challenging overall business climate, the late arrival of winter in Europe dampened sales at wholesale accounts and retailers, which slowed the in-take of spring collections and therefore had an effect on PUMA’s first-quarter sales.

As a consequence, PUMA has begun to respond to these challenges, optimizing the efficiency of its business model in the EMEA region. To this end Sergio Bucher, formerly PUMA’s Head of Global Retail, was appointed the new General Manager for Europe. In line with the transformation outlined in the “Back on the Attack” growth strategy, the company is currently in the process of streamlining the country organizations and centralizing some of the back-office functions on a regional level.

A strong sales performance in Asia/Pacific and the Americas counterbalanced the softening sales in the EMEA region. Fuelled by growth in India, Korea and Japan, which all saw significant demand for PUMA’s Motorsport, Running and Lifestyle products, Asian sales climbed 10.2% currency adjusted to € 192.1 million.

Sales in the Americas improved by 8.5% currency adjusted to € 260.8 million. Within the Latin American region, Mexico, Argentina and Brazil in particular posted strong, double-digit growth rates. North America was up, supported by the new joint ventures Wheat Accessories and Janed socks and bodywear.


Footwear sales declined 2.1% currency adjusted to € 414.6 million in the first quarter. However, PUMA has seen promising results of some of its major recent footwear product launches.

For example, the ARCHIVE LITE, an ultralight shoe with a contemporary look, is generating a double-digit sell-through in key leading doors in various countries in Europe and Asia. These styles have a distinct unique selling point, are bold, young and colorful and are the proof that PUMA is heading in the right direction. PUMA has extended its Lightweight Concept, incorporating further styles for the fourth quarter to fully capitalize on this opportunity.

The relevance of the Lightweight concept also applies to PUMA’s Performance categories. In 2012, PUMA’s Year of Speed, the company will be launching a new performance collection at the end of May that for the first time encompasses all of PUMA’s sport categories. Inspired by Usain Bolt, the collection answers every athlete’s need for speed by taking performance technology and innovations, and incorporating them in footwear and apparel developed for various sports.

Sales in the Apparel segment climbed 8% currency adjusted to € 267.6 million. The Lifestyle and Performance collections resonated well with consumers in all markets. Running, Lifestyle and Golf apparel products in particular were in demand. PUMA further expects an increase in Apparel sales on the back of UEFA Euro 2012.

Accessories jumped 19% currency adjusted to € 138.7 million, where Cobra PUMA Golf continues to deliver an outstanding performance, while the new joint venture for socks and bodywear in the North American market follows suit.

PUMA’s Teamsport category was further strengthened in the first quarter by the signing of a long-term sponsorship contract with the Slovak Football Association, and the confirmation of a new long-term contractual partnership with the Italian Football Federation that sees PUMA now actively managing the entire licensing portfolio of the Federation’s assets on a global basis. PUMA also expanded its international club portfolio by signing the Brazilian Club Botafogo from Rio de Janeiro and the Italian Serie A club US Palermo. In addition, PUMA extended its partnership with French football club Girondins de Bordeaux. The Teamsport business is expected to benefit not only from these new acquisitions, but also from the UEFA Euro 2012 in Poland/ Ukraine in June.

PUMA Running was driven by the light-weight PUMA Faas range, which includes the ongoing best-seller PUMA Faas 300. The Running category will receive a further support in the second quarter with the unveiling of Olympic performance and lifestyle collections of the Jamaican athletics team designed by Cedella Marley, daughter of Reggae legend Bob Marley, at the beginning of June.

Motorsport remained active during the first quarter. PUMA boosted its Formula 1 portfolio by signing new contracts with Mercedes GP Petronas. Nico Rosberg then provided the perfect start to this partnership, scoring his maiden F1 victory in his Mercedes AMG Petronas car at the Chinese Grand Prix in Shanghai two weeks ago.

Sales in Sailing also continued to increase as the marketing activities around the Volvo Ocean Race and the press coverage of PUMA’s most recent success in this ocean marathon have been positive. In the current America’s Cup World Series PUMA, who serves as the exclusive licensee for the America’s Cup Event Authority and the PUMA-sponsored Team ORACLE Racing, are getting prepared for the next exciting regattas in Venice in May and Newport, Rhode Island in June.


Input price pressures were mainly responsible for the drop of the gross profit margin in the first quarter, which comprised 51.2% of group sales, down from 52.4% at the same point last year. Hedging also had a negative effect, as did the product and regional mix.

As a consequence, Footwear fell back from 51.3% to 49.5%, Apparel dropped slightly from 53.7% to 53.5% and Accessories declined from 54.0% to 51.9% which is mainly due to the first time inclusion of the newly added US sock and bodywear business, which carries lower margins.

Retail sales constituted € 122 million, or 14.9% of total sales, in the first three months of 2012, an improvement of 15.2% year on year, underlined by positive comparable sales in the current store portfolio and newly opened stores in 2012.

Operating expenses rose by 8.0% to € 322 million in the first quarter of 2012, as the “Back on the Attack” growth strategy continues to be implemented. This represents 39.3% of group sales compared to 38.6% in 2011. This increase was mostly due to rising marketing, research, design and development expenditures. Another component of the increase is the expansion of the retail store portfolio over the past twelve months.

Operating profit declined in the first three months of 2012 from € 111.0 million to € 102.0 million, caused mainly by the drop in gross profit margin. The moderate increase in operating expenses was in line with PUMA’s plans. As a consequence, the EBIT ratio decreased from 14.4% last year to 12.4% this year.

The financial result improved from € -0.2 million to € 1.1 million in the first quarter due to positive currency developments.

PUMA’s overall Working Capital increased by 21.0% to € 723.7 million. Looking at assets, inventories rose by 26.4% to € 587.1 million. This is mainly due to anticipated sales growth in the upcoming quarters, continuous expansion of our retail store network and higher average prices per unit. Trade receivables also increased by 7.4% to € 620.5 million, broadly in line with sales growth.

The Free Cashflow (before acquisitions) remained constant at € -111.5 million. Outflows consisted mostly of working capital increases. The payments for acquisitions relate to the purchase of the outstanding Dobotex shares, effected on the 1st of January 2012.

Capex continued to increase by 28.1% to € -13.8 million and went mainly into Retail stores, supply chain initiatives and IT projects as “Back on the Attack” investments continued.

The Total cash position was reduced by 18.3% from € 300.8 million to € 245.8 million, caused by the purchase of the remaining Dobotex shares. Including stable bank debts, the net cash position finished at € 203.2 million.

PUMA’s management has taken actions to improve the company’s cost structure and strengthen product desirability to foster sales growth and profitability. PUMA is confident of achieving the full year targets as outlined in the 2011 annual report. Management continues to foresee sales increases in the high single-digit range and an increase in net earnings in the mid-single digit range for the full year.