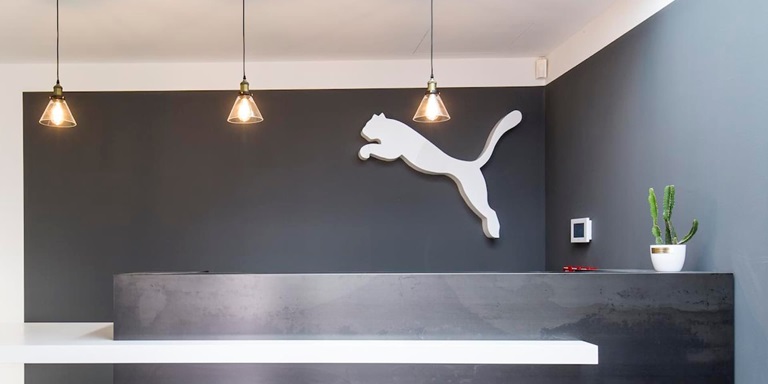 On December 1, 2010, PUMA received the Award for the Best Corporate Social Responsibility (CSR) Initiative at the prestigious Peace and Sport Awards 2010 for its PUMA. Peace program and multilayered campaigns to support global peace. The awards ceremony was part of the 4th annual Peace and Sport International Forum in Monaco. HSH Prince Albert II of Monaco and Joel Bouzou, President and Founder of the organization, paid tribute to achievements that best embody the role of sport to promote dialogue and build bridges between divided communities. Six awards were given to recognize people and initiatives in sport, which made key contributions to social stability in the world during the previous year, at a gala event on December 1 for over 500 distinguished guests from the world of politics, sports, the private sector and civil society.

“The goal of our PUMA.Peace initiative is to create programs that foster a more peaceful world than the one we live in today,” said Jochen Zeitz, Chairman and CEO of PUMA. “Each of us can make a difference in this world as individuals, as corporations and through strategic partnerships. Moreover, at PUMA we feel that we are uniquely positioned to contribute to making the world a better place for generations to come. Our PUMA.Peace program recognizes the power of sport to bridge divides and unite people around the world through a common language. We are extremely honored to receive a Peace and Sport Award in support of our endeavors.”

PUMA works towards a better world for generations to come through the PUMAVision platform. Through the initiatives of PUMA.Peace, PUMA is providing real and practical expressions of this vision by strategically implementing long-term partnerships, creating initiatives and raising global awareness for these projects. PUMA.Peace works to inspire and educate individuals around the globe that peace is possible and utilizes sport as a vehicle to achieve this goal.

PUMA continues to raise awareness for the United Nations International Day of Peace; an annual day of global ceasefire and non-violence on September 21, and partners with the non-profit organization that inspired the days creation, Peace One Day. In 2008, PUMA.Peace and Peace One Day launched One Day One Goal, a global football movement that celebrates Peace Day with goodwill matches played around the world, and in many cases between communities previously in conflict. In 2010, over 3,000 One Day One Goal commemorative football matches were played around the globe on or around Peace Day in every UN Member State.

PUMA.Peace initiated a symbolic truce with adidas in 2009, after a 6-decade rivalry started by the companies founding brothers, as a commitment to Peace Day and to establish a new legacy of peace between the companies. The companies played a mixed One Day One Goal football match between employees, including CEOs Jochen Zeitz and Herbert Hainer, and in 2010 the town of Herzogenaurach where the companies are headquartered also joined in and put aside its history of conflict to play for the “Peace One Day Cup”.

PUMA.Peace will continue to develop initiatives that promote and support peace across the globe. In addition to PUMA’s Award for the Best Corporate Social Responsibility (CSR) Initiative, five other Peace and Sport Awards were distributed last night including: the Grand Prix for the Peace and Sport Image of the Year, the Award for Best Peace Project from an International Sports Federation, the Award for the Sports Event for Peace of the Year, and the Award for the Sports Non-Governmental Organization of the Year. Winners were selected by a jury composed of eminent figures, invested at the highest level in activities for the promotion of peace through sport.