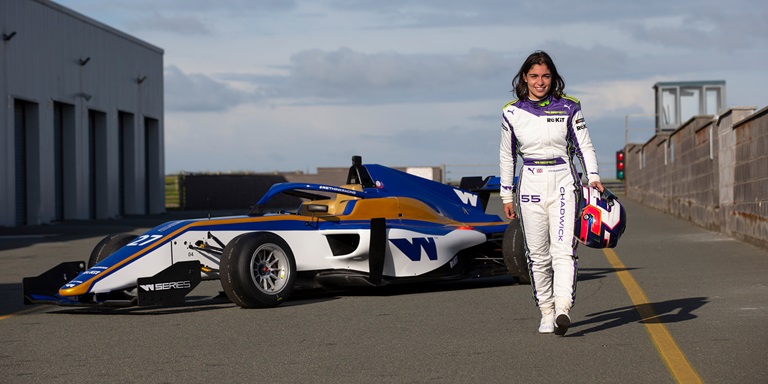 Global sports company PUMA resumes the collaboration with W Series, the international single-seater motor racing championship for female drivers. PUMA will tailor its racewear with a female-first design in 2021.

Race suits for female racing drivers have traditionally been redesigned versions of those initially made for their male counterparts. But this year – when W Series will stage eight races in partnership with Formula 1 – W Series’ drivers will compete in PUMA racewear tailored specifically for the female body from the very start of the design process. This means that the season-opening race at Circuit Paul Ricard, France, on 26 June will be the first time that a fully female grid will compete in PUMA racewear tailored for women.

“Motorsport is in PUMA´s DNA, just like our brand´s principles of equality, diversity and inclusion. Hence W Series is a perfect fit with the values we share. For us at PUMA, it is irrelevant whether a driver is male or female, the only thing that matters is the passion for motorsport. We are very proud that we have been the official racewear supplier of W Series since 2019 and that this will continue in 2021. We recently launched a new women’s campaign called ‘She Moves Us’ which celebrates females who have moved culture and sports forward and will inspire women around the world. In terms of motorsport, there could not be a better ambassador for this campaign than W Series. The drive for more women in motorsport is proven by the partnership between Formula 1 and W Series this season. I am sure this will help W Series move one step forward and promote the series on a global scale. Besides our passion for motorsport, we want to make sure that the W Series drivers feel safe, competitive, and comfortable in the cockpit. So PUMA has designed tailormade race suits for female drivers to ensure a perfect fit.”

“A racing driver has to feel comfortable in the car, and feeling relaxed in what we are wearing goes a long way to achieving this. PUMA and W Series are aware that this is important for the drivers, and that generic, unisex racewear modified for female racers does not lend itself to optimum performance. These new race suits are tailormade to fit my body shape, allowing me to focus on racing hard.”

“W Series keeps breaking barriers as we today announce the continuation of our partnership with PUMA, who have once again shown their commitment to our mission by tailoring racewear specifically for our female racing drivers. We are determined to change the face of motorsport and PUMA will play a big part in that this year when we race in partnership with Formula 1.”

PUMA Motorsport supplied high-performance, flame-retardant racewear for the drivers during W Series’ successful inaugural season in 2019 and will continue as Global Racewear Partner in 2021. Their triple-layer Nomex race suits will ensure Formula 1 standards of safety, performance and comfort for W Series’ drivers. PUMA is associated with the highest levels of motorsport. The global sports company is the current partner in Formula One of the Mercedes-AMG Petronas Formula One Team, Red Bull Racing Honda and Scuderia Ferrari Mission Winnow teams. PUMA is also the official supplier of BMW Motorsport in IMSA and Formula E, Porsche Motorsport in WEC, GT Sport, Porsche Supercup and Formula E, and Team Penske in NASCAR and IndyCar.