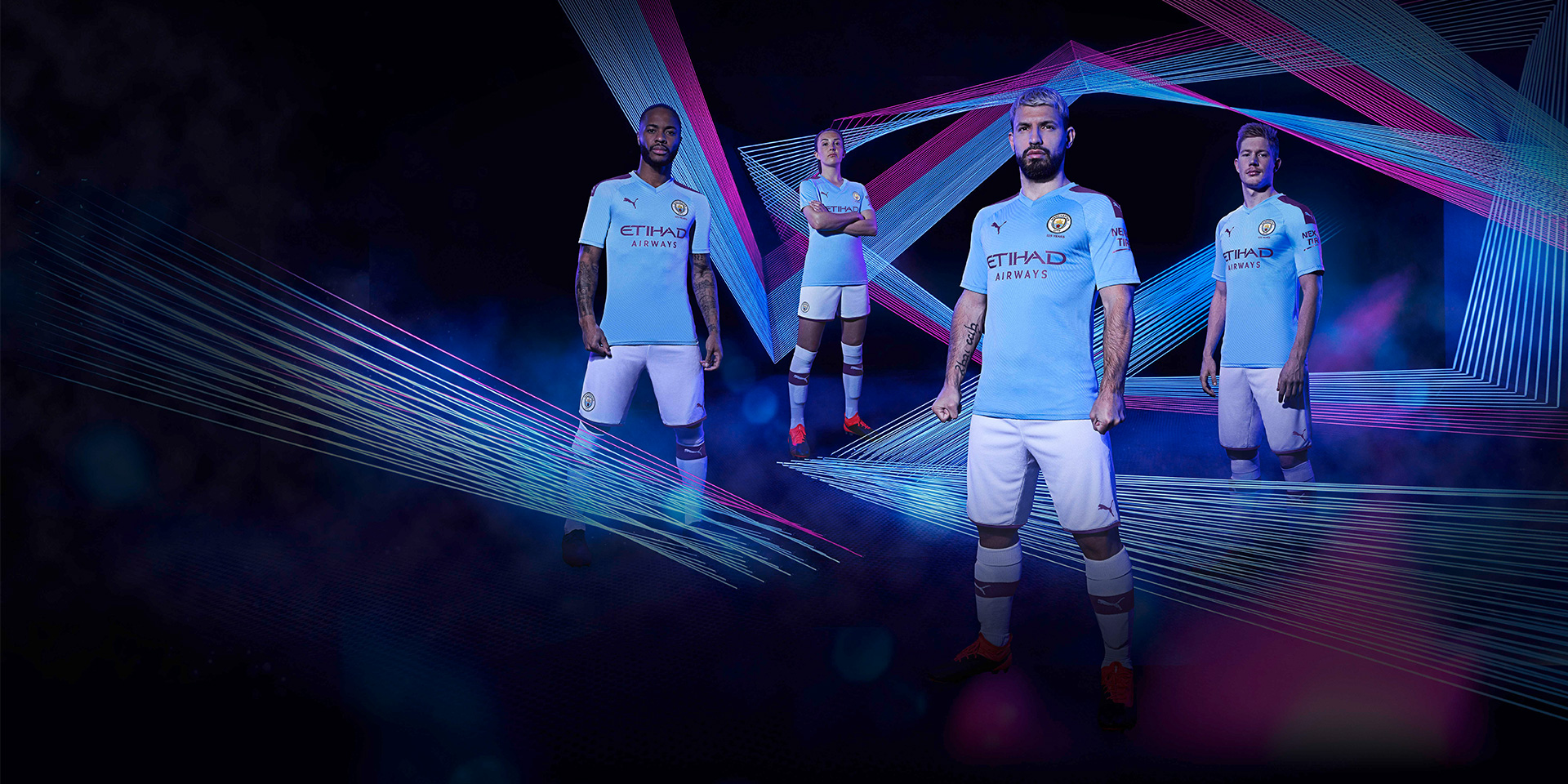 PUMA and Manchester City today revealed their 2019/20 Home and Away kits, the first designs of their partnership, which pay tribute to Manchester’s industrial and cultural heritage.

The 2019/20 Home kit draws inspiration from Manchester’s industrial heritage, celebrating the true grit, fight, and character that emerged from the cotton mills of Manchester. The woven jacquard wave pattern, running through the shirt, is a visual representation of the looms which were integral to the industrial revolution in Manchester. The iconic City blue is highlighted with purple, a colour previously used in historic club away kits, and is used on the Home shirt for the first time.

The 2019/20 Away kit celebrates the city’s “Madchester” years, a period of extraordinary cultural activity in the late 1980s and early 1990s.   The kit is directly inspired by former nightclub, The Haçienda, which was once an epicentre for emerging music, bands, DJs, and artists. Using black colour as a base, this Away kit features yellow stripes on the left shoulder: a reference to The Haçienda’s iconic graphic identity. Additional peach and City blue pops create a colourful representation of this legendary cultural icon that was the heartbeat of the city.

“The partnership between Manchester City and PUMA goes beyond football. We want the club’s global fans and local Mancunians to all feel invested in this, and it starts with combining our very creative kit designs with authentic stories from Manchester’s history and music scene,” says Adam Petrick, PUMA’s Global Brand Marketing Director.

“We want to bring Manchester City and PUMA’s brand initiatives together when and wherever we can, and that means going beyond the pitch, into wider areas of football culture such as gaming, community, fashion and music. That’s how we can really impact football fans of all ages and demographics.”

This approach inspired last night’s official kit launch event, headlined by local musician and City fan Bugzy Malone, which was held at Manchester’s Mayfield Depot, and showcased how music will be integral to the partnership.  Bugzy Malone, alongside Sergio Agüero, Oleksandr Zinchenko and Pep Guardiola, also feature in the launch film.

PUMA and Manchester City also launch a full range of Stadium, Teamwear and Fanwear, showcasing design and product innovation in performance and style collections. Home and Away jerseys and all products are available on PUMA.com, ManCity.com and in stores around the world, including the City Store at the Etihad Stadium which has undergone an extensive refurbishment, from 8AM UK time on Monday 1 July.

For pictures and the Press Release download the Media Kit below.