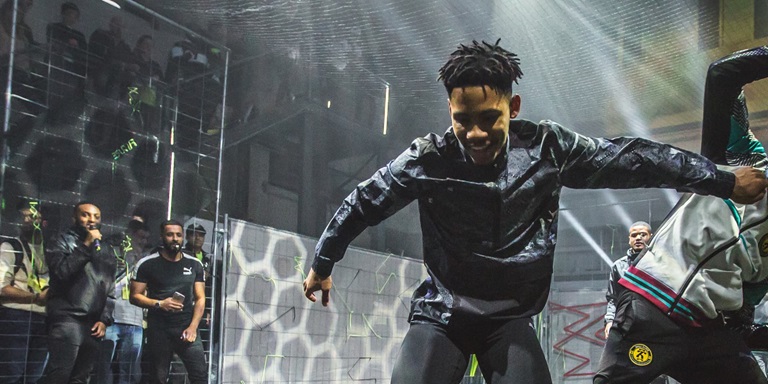 PUMA FOOTBALL HIT NEW LEVELS IN LONDON WITH THE LAUNCH OF THE PUMA FUTURE 18.1

Last night in the heart of London, the PUMA Future Vault played host to a 500-strong crowd of football loving teens, social media icons and industry guests in a highly immersive underground bunker experience, designed for maximum expression at the meeting point of football and culture.

The opportunity to stick a finger up at formalities in their beloved sport and showcase flair in the much-hyped Future 18.1 boots was made available to all.

Through a high energy 2 vs. 2 tournament and two competitive skills stations guests had the perfect chance to put the latest PUMA Future boots through their paces. After BBC Radio’s Charlie Sloth and Marko Arnautovic (International Austrian forward, West Ham) fronted the trophy giving ceremony for the various winners, a hotly tipped who’s who of European rap stormed the stage in a high-energy celebration of all things Future.

Hardy Caprio is one of London’s fastest rising rap stars and is celebrated for his cheeky lyrical content and unquestionably London rap style that fuses references from all the current strands of contemporary UK MC culture.

One Acen is a talented UK rapper and producer that is widely tipped for big things in music owing to his expressive showmanship and ability to deliver consistently strong tracks across a spectrum of vibes from rap to afro-bashment.

Krept and Konan - PUMA ambassadors - are the UK’s biggest rap duo, proudly putting their respective South London neighbourhoods on the map as exciting hubs for the future of UK music.

MHD - PUMA ambassador - is a Parisian rapper who’s been pioneering the emerging afro-trap genre that’s been taking the world by storm over the past 12 months.

FUTURE is the first football boot with a truly customizable fit. NETFIT technology allows the wearer to lace their boots any way they want in order to fit perfectly, no matter the foot shape or lock-down need.