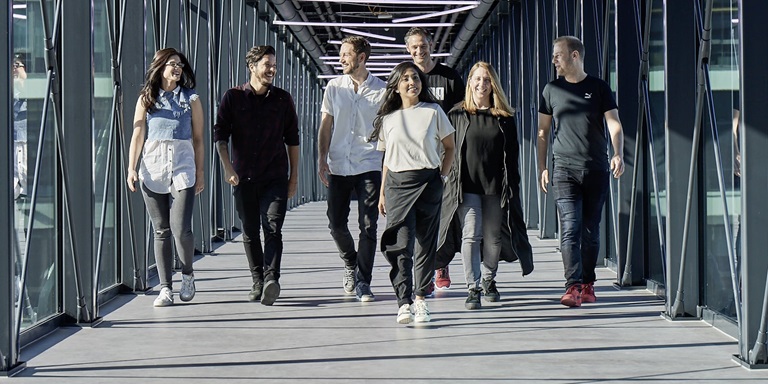 With PUMA, you have the chance to grow into a person and colleague capable of taking on any challenge that heads your way. Check out what PUMA employees have to say about their development:

I began my career with PUMA in 2001 after being recruited by some colleagues I had worked with at a previous company. I was drawn to PUMA because of the people and how passionate they were about the brand. I started as a Store Manager and had the opportunity to run three different stores of varying volume throughout Southern California.

In 2004, I was promoted to a District Manager and relocated to Boston, Massachusetts. After being in position for just over a year, I had the opportunity to run a larger, higher volume district on the west coast. My district alignment varied over the years and included stores in California, Nevada, Washington, Oregon and Hawaii. During this time, I had the opportunity to support global training by facilitating workshops in the UK and Germany.

In late 2010, I was promoted to Regional Manager where I oversaw stores across the US and Canada. During my time as an RM, I had the opportunity to participate in an International Mentorship Program which afforded me the chance to visit Australia, Hong Kong, Taiwan, South Korea and Argentina to offer feedback and share best practices. Participation in this program was as impactful for me as it was for my mentees.

PUMA has provided me with what is hands down the best training in all of retail. Not only have I learned the operational aspects of the business, the company has invested in my interpersonal and leadership skills. Utilizing the training, tools and resources the company provides, along with the consistent feedback and support of my supervisor has led me to my current position of Director of Stores.
My boss always says, “People work for people”. I am fortunate to work for a great brand and even more fortunate to be able to work with such an incredible, talented and motivated team!

I started out at PUMA Boston as a temporary assistant to the HR team with some administrative tasks. Shortly after that, a full-time job as HR Coordinator opened. With a background and Master’s Degree in Social Work, HR concepts were no problem. I got to dive into the changing business at PUMA and quickly learned how we as HR bring value to an ever-evolving global organization. In the next five years, I progressed quickly, hitting all disciplines of HR, Recruiting, Employee Relations, Benefits, Compensation and Organizational Design. Now, after two assignments at PUMA’s global headquarters in Germany, I’m based in Germany in a full-time position, supporting and integrating our new global HR system into the business teams.

I had the privilege of joining PUMA’s Regional Creation Center to lead a small tactical Apparel Design Team, for the North American Market, five years ago. I brought to PUMA a multitude of previous design, management, creative direction oversite and experience working and managing a variety of larger and smaller design teams for both Footwear and Apparel Brands. With patience, dedication and professionalism and after two and a half years in my regional role, I was presented with an opportunity to head up the Mens Performance Apparel Design Team for the Global In-line business. After a few successful seasons, and with support from management, I was then presented with the opportunity to head up the Global Performance Footwear Design Team for the Running-Training business.

I had the good fortune of being selected for this role, in part because, I was able to draw upon my previous experience in both footwear and apparel design, but more importantly, the  belief and unconditional support the PUMA culture provided. In addition to my past successes managing and leading people, I fully embraced the PUMA Spirit and culture, of which has allowed me to continue on my path of both personal and professional growth. I have never worked at another company, where the potential for possibility is endless at any and all levels.

I've always found it interesting how life finds a way to connect things. I’ve been a Formula 1 fan since I can remember (thanks for that, dad) and I focused on pursuing a career that would allow me to be contact with this passion. That brought me to PUMA and got a chance to connect two things I love: F1 and Brazilian culture. So, why not put it all together in a futevôlei match? The idea was to challenge the two Red Bull Racing drivers (Ricciardo and Verstappen) to play this famous sport and see how they would perform. I’ll admit I was afraid but they turned out to be brilliant at it and they had a lot of fun. I grew and learned a lot as a professional and person working alongside an international team, having the support of my own team and getting to know other global partners. Lifetime experience. That’s when that phrase “choose a job you love and you will never have to work a day in your life” makes total sense. So, let's keep pushing the limits and doing things with passion, success is sure to come!

What drives me? Daily challenges! In the past eight years that I have been working at PUMA, I have strengthened my most important values: determination, commitment and confidence. And there is nothing better than having a job where I face challenges by applying these values and instill them into my team. This leads to communication and passion, two keys for success in a professional environment.

I started out as Manager Merchandising Performance DACH. As a sports lover in general, I ended up working in sports marketing. When a job in trade marketing appeared, I leapt at the opportunity. I always want to deliver 100% and that counts for my projects. Implementing a clear and comprehensible distribution policy for PUMA sportstyle products was a part of that. Being reliable and honest is part of who I am and I take internal and external partners as customers. I think they all deserve the best available assistance and that’s a reason why I was chosen as Teamhead of the merchandising team – only three years after starting at PUMA.

As Head of Marketing for PUMA Middle East, I was presented with the opportunity of leading the EEMEA region, temporarily reallocating to the hub office in Austria and assuming the roles and responsibilities of my direct line manager during her extended maternity leave as Acting Regional Head of Marketing EEMEA. The role was both challenging and exciting on various levels. On one part, it was a complete lifestyle change and culture shift. On the other, it was taking on and managing an additional set of markets that came with their own rules and regulations, culture, mentalities, consumer profiles and challenges.

I grew up loving Sportswear and Sports. My mom actually worked for sports industry for 17 years, so for me, having a career at PUMA was just meant to be. I started as administrative assistant for a field agency, which then dissolved. Thankfully, regional sales team was brought in-house and I was appointed a Sales Representative, soon progressing to Key Account Manager. My job was growing and managing the Motorsport Business Unit. I was always driven by my love for the product and passion for the brand. Two years later, Luke approached me to take on the role as Footwear Merchandise Manager and later, I was Teamhead of Footwear Merchandise. Currently I’m Senior Teamhead Sportstyle. As a Streetwear/Fashion enthusiast, my current position is perfect, I love it!

Speed up Your Spirit

After joining PUMA Ukraine in 2009 as a shop assistant, I went through various positions and contributed to the growth of local retail. First, I was moved to the office and worked as a replenishment specialist. Then came the promotion to Manager Merchandising FPS Ukraine in 2014. At that point, I was responsible for product planning and buying for Retail FPS Stores in Ukraine. I started to get really involved PUMA Ukraine as part of the Merchandising team. After eight great years at PUMA Ukraine, I moved up to the position of Retail Planner Europe for Full Price and eCom Apparel in 2017.